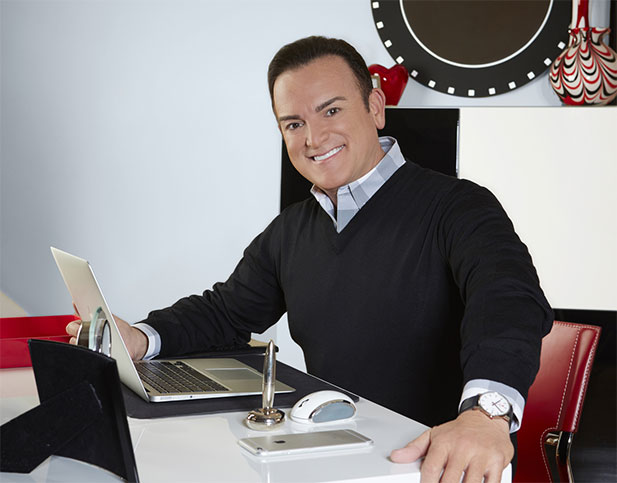 Bill Green was one of the most successful Program Hosts and the On Air Guest Trainer for 24 years at HSN.  January of 2018, Bill established his own company, Bill Green Enterprises, LLC providing On Air Guest Services for both HSN and TSC in Canada and provides Sales & Media Coaching Services to clients working in electronic retailing Internationally.

Bill was born in Miami, Florida, on January 11 and at the young age of 7, he was determined that some day he would be the host of the Tonight Show.

Bill grew up working in the Fine Jewelry business for Zale Corporation based in Dallas, Texas for over 16 years where he worked in most every facet of the retail jewelry industry. Bill’s dream to work in television became a reality when he was recruited by HSN in 1994 where he developed the HSN Quality Assurance Program for Fine and Fashion Jewelry and just two years later, Bill auditioned and become one of the “national television hosts” and “personalities” for HSN, the World’s Pioneer of Electronic Retailing and continued this journey in television host for 22 years.

Bill continued career as HSN’s On Air Guest Trainer for 2 ½ years Training & Coaching all New Guests and Celebrities how to present their products, work on live television and how to improve their on-air product presentation skills.

With a strong entrepreneurial drive, Bill made the break in January 2018 when he formed his own company, Bill Green Enterprises.

Today, Bill Green Enterprises provides Media Services such as; On Air Guest Hosting for HSN in the United States (a division of the Qurate Retail Group) and for TSC (The Shopping Choice) based in Toronto , Canada which is a subsidary owned and operated by Rogers Communications.  Bill also provides Media and Sales Training Services for both independent private clients and for other International electronic retail companies and Consulting for private businesses in both electronic retail and the brick and mortar retailing.

Bill has a unique, entertaining, sometimes comical yet sincere, and “down-to-earth” personality and connection with viewers and anyone he meets. He invites you to “follow”, “like” and “share” both this website and his social pages at the top right hand corner of this page.

“I am never satisfied helping new traditional retail or television talent “just be good,” its important for me to “make them great” as this craft that I  have done for years. You can contact Bill Green here.

Click on the plus signs below to unfold more information…

When did Bill develop an interest in Television & Entertainment?

When did Bill develop an interest in Television & Entertainment?

Bill developed an interest in the arts and entertainment at a very young age learning magic from a Junior High School Government teacher who was a member of an organization called The Brotherhood of Magic.

Intrigued by magic and entertaining, Bill began performing magic at parties and has always enjoyed entertaining family, friends and acquaintances. He loves standing up in front of anyone who he could bring laughter to and entertain.

Bill majored in the theatre in High School with a strong interest in Comedy and went on to win “First Place” at the Florida State Thespian Theatrical Competition in 1975 for Improvisational Comedy competing against students from all High Schools in the State of Florida.

Perhaps it’s because Bill’s creativity, passion and interest in the arts, that Bill was elected in as the President of a very progressive class and educational curriculum entitled, “Creative Media,” which focused on Film, Video Production and Editing in High School.

In his graduating class of over 800 students, Bill also won the award from the Language Art’s Department for the “Most Persuasive Speaker.” Little did Bill realize how important that skill and ability would certainly help him later in his career as a Host.

How did Bill get his first break?

How did Bill get his first break?

In the mid 1970’s, Bill began his career in radio at the young age of 16 while attending high school. His first job in entertainment was working at a popular rock radio station in Miami Beach, Florida.

It all began because Bill won a “record album during a radio show contest” and he took a city bus to the radio station on a Sunday to pick up his record winnings because he anxiously wanted to see the inside of a Live Radio Station.

Fascinated by the Live Broadcast excitement, Bill asked the D.J. who was on air if he could help answer the telephone music request lines because there was no one there to answer them.

By the end of the evening, Bill was offered a part-time job working for the most popular Rock Radio Station, WMYQ located in Miami Beach, Florida at the time.

“This was just the beginning of an amazing career,” say’s Bill…

Bill was a Talk Show Producer?

Bill was a Talk Show Producer?

Perhaps Bill’s most surprising accomplishment he reflects back on today was acting as stand-in producer for The Larry King Radio Show starring Larry King at Cox-Stornz Radio Stations, WIOD and WA1A in Miami.

Who knew that Larry King would end up becoming one of America’s legendary journalists on CNN?

In 1976, upon graduating high school, Bill and his family moved to Dallas, Texas, where he continued his career in radio while attending college and continued producing News and Information Radio Talk Shows for such “would-be” television journalists such as Bill O’Reilly for WFAA Radio, the Dallas ABC Affiliate.

Although Bill has always had a great passion for working in the entertainment industry, he learned of a great opportunity working in retail where he also expressed a strong interest.

It was time to begin a business career to pay his bills.

Where did Bill work early in his career?

Where did Bill work early in his career?

In 1980, Bill interviewed for a Manager Trainee position at a Zale’s Jewelry Store in Dallas, putting his entertainment dream on hold.

Everyone knows the story of the starving actor. Well, it was no different for Bill. He had to earn a living and pay his bills.

Although Bill had aspirations to work in television and the entertainment industry, he began his career as a retail jeweler working for the Zale Corporation where he spent 16 years of his early business career.

Bill’s first job in retail was working as a Manager Trainee for a flagship Zale’s Jewelry Store was an opportunity that quickly unfolded. Never passing up a business opportunity or career change, Bill worked his way up the corporate ladder at Zale Corporation, the world’s largest retail jeweler.

Because the Zale Corporate Headquarters are located in Dallas, where Bill lived at the time, he was privileged to be educated and influenced by key Zale Corporate executive staff members who taught him every aspect of the jewelry business.

At times, Bill even received direct training, supervision, and mentoring from many of the founding family members of the Zale Corporation, including Morris B. Zale and Ben Lipshy who were also the founders and innovators of the “retail credit jewelry business.”

Those experiences represent some of the most significant and influential training and mentoring times of his life. It was at Zale that Bill gained the knowledge that he practices today as a Show Host for HSN about all jewelry; diamonds, gemstones and precious metal jewelry, watches, pearls and collectible giftware.

In business, Bill has always been a big risk taker.

In business, Bill has always been a big risk taker.

Bill took career risks and never thought twice about switching business interests within Zale Corporation for the opportunity at professional advancement and to learn every aspect of the retail business.

Bill Managed jewelry stores, worked in Human Resources Training and Development, Supervised Zale’s Sales & Management Training Program, worked in Marketing/Advertising and eventually was promoted to the Manager of Quality Assurance developing and overseeing all of the Zale Corporation’s product quality.

Bill was then promoted to Director of the Insurance Replacement Division before leaving Zale’s.

These positions allowed Bill to travel the all over the U.S. and around the globe where he learned so much about fine jewelry manufacturing, diamond/gemstone grading, purchasing, sourcing, product development and also many different cultures.

As a side career and hobby while working at Zale’s, Bill began dabbling in stand-up comedy to satisfy his urge to still one day become an entertainer or actor.

With a unique ability to imitate voices and great skill at impersonation, Bill specialized in celebrity impersonations working aboard numerous cruise ships and entertaining for hundreds of corporate parties and private venues while working a full-time job to pay his bills.

How did Bill join HSN?

How did Bill join HSN?

In 1994, HSN was developing an aggressive Merchandise Quality Assurance program to support their corporate strategy to improve the quality of their products to once again become the leader in the World of Electronic Retailing.

Bill was recruited by HSN as their Director of Quality Assurance where he utilized his vast knowledge and experience of the jewelry business to support develop their quality program for Fine & Fashion Jewelry which has set the standards for the jewelry quality at HSN today.

Two years later, HSN held “open host auditions,” Bill’s boss and all of Bill’s peers at HSN said he should try out for the job – and the rest is history.

In 1996, after waiting 6 six weeks from the date of the show host audition, Bill received a phone call in which an HSN Casting Director said, “Bill, we made our decision. We want you to become a Show Host.”

“It was the most exciting news I had ever heard!” Bill recalls.

It was at that point in Bill’s career where he returned to his dream of working in television and entertainment while making great use of the skill and knowledge he had learned over the years working in the retail jewelry business and professional sales. This job was the perfect match for his skills, abilities, knowledge, interests, and dreams.

Where has Bill traveled?

Where has Bill traveled?

Bill has been privileged to travel the globe. He has visited a number of places including; most of the United States including Hawaii, Alaska, and Guam. He has also traveled abroad through China, Hong Kong, Thailand, Egypt, Italy, England, Hungary, Finland, France, Turkey, Greece, Switzerland, Portugal, South America, England, Spain, Canada, Mexico and many of the islands throughout the Caribbean.

How long has Bill Green been a Show Host at HSN?
What are his favorite categories?

How long has Bill Green been a Show Host at HSN?
What are his favorite categories?

Since 1996, Bill has hosted thousands of hours of live television shows. As Bill learned the craft of “Show Hosting,” he has also developed a strong interest and expertise for a variety of product categories and loves them all equally:

Who are his favorite guests?

Who are his favorite guests?

Bill has also had the privilege of working numerous and talented guests, curators, designers and celebrities over the years. Some of his favorites include; Mariah Carey, Randy Jackson, Patti LaBelle, Susan Lucci, Jeanne Cooper, Mimi Rogers, Valerie Harper, and Jack Klugman and Journalist Cindy Adams, just to name a few.

What are Bill’s favorite hobbies and what’s next for Bill?

What are Bill’s favorite hobbies and what’s next for Bill?

And of course, Bill’s favorite hobby of all is shopping!

Bill would love to remain with his family at HSN for the rest of his career, however, if he were not on air at HSN, he’d be working elsewhere in television, entertainment, or professional sales… it’s just his passion!